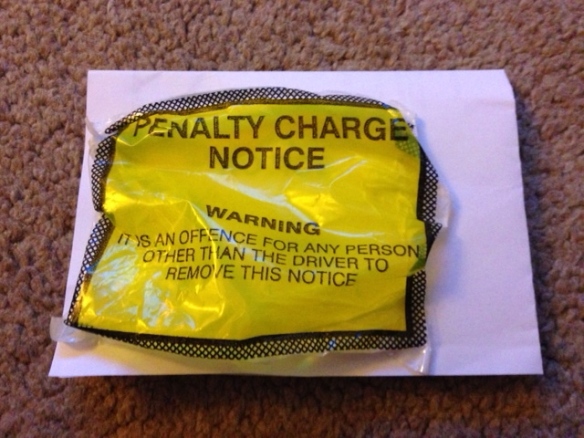 Since becoming a father, I admit that there have been occasions when I’ve found the dramatic reduction in my ‘free time’ a bit frustrating. Whilst this is just one downside in a field full of positives during parenthood, I’ve realised in the last 24 hours that less time to yourself can actually be a good thing.

Let me explain: This week, my wife and daughter are away for a couple of nights, so my time in the evenings is my own. Last night was the first night that they were away, but I had a dentist appointment after work. After this appointment, I came back to find a parking ticket on my car. I was so annoyed by this (technically justified) ticket that I subsequently spent the remainder of the evening – including 10 minutes eating microwaveable noodles – thinking about it. Needless to say, if my wife and daughter were at home, I would have been preoccupied and therefore not given more than a passing thought to this annoyance, let alone spent time and effort writing a lengthy note to the offending council. This is how it went:

Earlier this evening, I was the lucky recipient of one of your parking charges, which was stuck onto my car windscreen at Hope Lodge car park because I was parked ‘without clearly displaying a valid pay and display ticket or voucher or parking clock’ (whatever the hell that last option is).

It’s true, I was parked without one of those fine objects, but I was really annoyed by the ticket, so I wish to give you some background and also tell you why I’m annoyed. I’m sure you don’t care, but I’ve had a lot of caffeine today and it’s my £50 (or £25 if I pay within 14 days – again, how lucky am I?) that you’re taking from me, so I’m going to tell you anyway.

I’d left work in Weybridge a good 1 hour and 10 minutes before my 6pm appointment in order to make what, outside rush hour, is a 25-minute journey. Having been caught in stop-start traffic on three separate occasions, I eventually arrived at Hope Lodge car park a minute before my appointment. I parked up, went over to the ticket machine and found that the parking charges appeared to have increased yet again since my last visit to Epsom, which, considering how much it costs to stop here, was surprisingly not that long ago. This time around, I apparently needed £1.50 to park as it was after 4pm. As luck would (not) have it, all the cash I had on me amounted to £1.40. I had mistakenly believed that this would have seen me through my appointment quite comfortably – how wrong I was.

“Not to worry”, I thought to myself, as I assumed that Epsom & Ewell Borough Council would have one of those fancy new systems like ‘RingGo’ where, if you don’t happen to have enough cash for a ridiculously-inflated parking cost, then you can instead pay through your mobile phone, either via an ‘app’ or by ringing an automated number. You know, like old times.

Sadly, there was not this facility at Hope Lodge car park (the irony of the name was not lost on me).

Even in Dorking, where I live, these new-fangled systems are commonplace, which is a surprise considering that you’re nearer London and have lots of shiny new infrastructure – but maybe that is just confined to the train station.

So, I was stuck. I had no means to pay for my brief time at Hope Lodge and, now late for my appointment and with a bladder straining against the weight of all of the aforementioned caffeine, I made the decision to just go straight to my appointment.

Whilst in the dental surgery, the hygienist told me that I needed “to relax” my jaw. This was difficult because there was a wasp flying over my head, a Gary Barlow CD playing in the background and the tube that was sending water down my throat made me feel like I was being water-boarded. It was only once the appointment was over and I left the surgery that my jaw, not to mention the rest of me, started to relax. Unfortunately, I clenched up again 30 seconds later, when I saw the ticket slapped on my windscreen.

By the way, my teeth are fine, just in case you were wondering.

Normally, I would be very happy because of this, but I’m instead angry that both unfortunate circumstance and your draconian, inflexible car parking measures have ruined my evening by forcing me to spend my time writing you this letter instead of watching ‘Sharknado 2’, despite the feeling that I’m sure it will be even worse than the first one.

This is not to mention the time I’ll have to spend actually paying your penalty charge. Yes, I’ll pay, despite the gnashing of my newly flossed teeth.

However, the main point of this letter is that I wish to point out that your car parking charges are a complete rip-off, both ridiculously excessive and pointlessly changeable, whilst the methods to pay are archaic, inflexible and show no concession to modern life. But, maybe you don’t want to make it easier for people to pay? No, it’s much better to keep fleecing the general public, avoiding the extra administration of upgrading to a newer, mobile phone-led system and also pocketing the additional revenue that will probably go towards paying for this year’s council Christmas party (seriously – where does the money from these charges go?)

After all, it’s not like I haven’t cumulatively over-paid for actual parking time in the last 15 years or so that I’ve been coming to Epsom (and not just for all the cinema trips). Do I get a refund for that? Of course not.

Sarcasm aside, I do hope that you’ll have had enough complaints about this to revisit both the cost and the method of parking within Epsom & Ewell as, currently, both are ridiculous.

In the meantime, you may take my money, but you won’t take my freedom (unless that actually becomes the overnight parking cost during the next price increase).

So there we go, I’ll certainly let you know if I get a reply. In the meantime, this was a reminder that time spent with my little family brings out the best in me or, at the very least, dilutes the sarcastic bits.