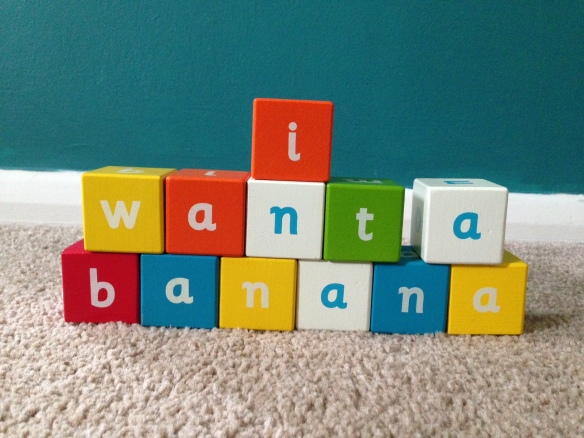 As my daughter has got more independent, mobile and interactive, I’ve often found myself wondering exactly what is going on inside her head. For instance, she spends a lot of time just wandering around holding random objects with such a determined sense of purpose, but her motives appear amusingly unfathomable. Given that she can’t verbally express herself in the way she would like (and the fact that she’s not allowed to play with pens ever since the whole ‘drawing on her own face’ incident), I’ve had a guess at what her various thought processes might have been over the last couple of weeks:

Wednesday 30th April. Woke up, had breakfast, pointed at lots of stuff, walked around picking up objects, dropped them, repeatedly attempted to climb the stairs, pulled down various books and DVDs from low shelving, ate most of my lunch but threw the rest on the floor, had a nap, ATE A BANANA, drank some milk, went to the park, toddled around in random directions, came home, tried to clamber into the recycling bin, had dinner, had more milk, had a bath, used a sponge to soak the bathroom floor, had a book about owl babies read to me, kicked up a fuss when it was time for bed. Standard.

Thursday 1st May. WORST. DAY. EVER. I should have realised something was up because the parents had been nervously talking about something called the ‘Emmemmaarrjab’ and Daddy was working from home today. At lunchtime, they took me to a brightly lit place that smelt vaguely of TCP, where they lulled me into a false sense of security by letting me play with different toys to the ones I have at home, whilst they sat around reading magazines about property and gardens. However, I was then taken into a room to be held tightly by the parents whilst two people I’ve never met before put injections into my legs. They hurt, so I screamed, wriggled and sweated A LOT. Post-injections, one of the people I’d never met tried to put my discarded sock back on me, so I shouted and kicked out at them. Telling me that I was “stronger than a lot of boys” didn’t help. Afterwards, the parents looked rather upset and kept saying to each other how hard they found the whole experience, whilst cuddling me and telling me it will be ok. So, THEY found it hard? Well, TRY HAVING THREE SHARP OBJECTS STABBED INTO YOUR LIMBS IN QUICK SUCCESSION AND SEE HOW YOU LIKE IT.

Friday 2nd May. I’m still not over the trauma of yesterday, so I refuse to engage happily with the parents or even make eye contact, let alone give them a smile or a cudd…wait, is that their breakfast? Hi!

Saturday 3rd May. Went to a big party today with the parents and my auntie. The birthday boy was 5 and there were lots of older children in bright items of clothing called ‘superhero costumes’. Not to be deterred by this, I announced my presence by repeatedly walking right into the middle of the fun and games, often dragging a large plastic chair with me (just to emphasise the point that I was there to be entertained). It was great fun and the food was good, especially the cheese-based stuff. For some reason, Daddy seemed very excited about colourful, edible objects called ‘party rings’. I can’t take him anywhere.

After food, we went outside where there was a large play area with swings and slides. I love these things, but the parents still won’t let me climb back up the slide. They’ve been funny about that ever since we went to soft play.

Sunday 4th May. Today’s goal: Pull out every possible item of my clothing from the box next to my cot, chew the sock-ons, drop the bibs through the gaps in the stair gate, put some leggings over my head and leave the rest lying at random intervals upstairs. Whilst I’m at it, I’ll also remove the plug-in air freshener, spilling the liquid over myself as well as everything I come into contact with. Nobody will want to go within a mile of anything that smells like ‘Evening Primrose’ ever again.

Monday 5th May. Today was a bank holiday, which appears to be an excuse for a massive skive. Anyway, I went for a long walk with the parents today and had a picnic in a large field. They let me have a run around as well. I thought I’d have a bit of fun by toddling towards piles of sheep poo, waiting for them to quickly try and catch up with me before veering away from the poo at the last second. I also kept pointing at the sky on random occasions. Fools – they looked every time.

Tuesday 6th May. I’ve got the sniffles AGAIN. It’s very uncomfortable and apparently I need to have drops put into my nose to relieve the snot. I hate those drops and I assumed that stuff was supposed to be coming out of my nose, not going back in? Anyway, I’m making my displeasure known by coughing loudly into the face of anyone who picks me up.

Wednesday 7th May. Still feeling poorly, although the viscous blackcurrant-flavoured liquid that the parents have been giving me has soothed the cough a fair bit. Memo to self: when older, develop a banana-flavoured cough remedy and, after I’m rich, use the proceeds to buy tonnes of actual bananas.

I did feel well enough to play with my wooden ‘Noah’s Ark’ toy, though. The parents like to keep all the pieces together, but I find it much more interesting to put Mrs.Noah and at least one of the giraffes on top of the radiator. I think they enjoy it there; it’s nice and warm.

Thursday 8th May. Today’s goal: Try and reach the remaining parts of the television screen that I haven’t yet managed to smear with my fingerprints. Problem: I can’t reach. The parents say that I’m due a growth spurt, so I hope that this happens before bedtime.

Update: No growth spurt before bedtime. The clean part of the television screen remains un-smeared. This is my Everest. 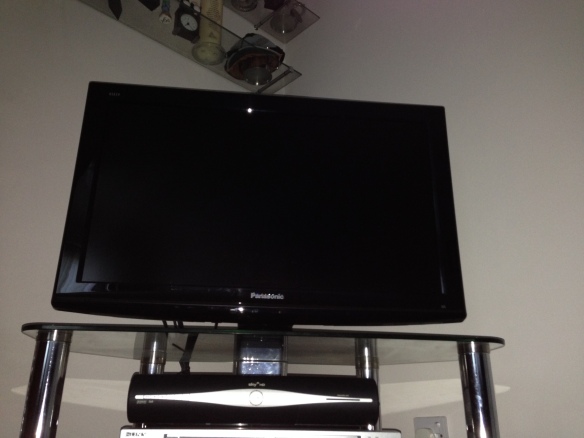 Friday 9th May. Today was the first day in ages that I’ve not had a single banana – disgraceful. The pear replacement service simply doesn’t cut it. I might call Esther Rantzen.

Saturday 10th May. Mummy had to work today, so Daddy put me in the baby carrier and took me for a walk in the countryside. It would have been lovely if he had managed to put my shoes on properly so that they didn’t keep slipping off. I’d also have preferred it if he had looked at the weather forecast and put our raincoats on before we left, so that we didn’t get drenched on the way back. Plus, the clambering over that gate (twice) was rather uncoordinated and awkward. At least the view either side of his head was nice.

Sunday 11th May. The parents were watching something called ‘The Eurovision Song Contest’ last night. According to the news this morning, this contest was won by a lady with a beard. So many questions…

In other (much less competent) singing news, the parents have been adding their own verses to ‘Wheels on the bus’ by using different noises and voices. As fun as this is, I can’t imagine a scenario whereby Elvis, a pack of seagulls and any number of elephants would be on the same bus all at once.

Monday 12th May. Why does society dictate that both feet should either have socks on or socks off? I find it much better to walk around with just the one sock on and I therefore laugh in the face of your draconian sartorial principles.

Tuesday 13th May. Daddy didn’t get home until well after midnight as he was out at a concert. Despite his pitiful efforts to keep quiet, my peaceful slumber was briefly disturbed, so I decided to wake up at 5.30am this morning. That’ll teach him.

4 thoughts on “Eternal sunshine of the toddler’s mind”