Recently, my wife and I were fortunate enough to take a 2-week holiday to western Canada, starting in Calgary and ending up in Vancouver, driving through Banff, Jasper, Whistler and Victoria along the way .It was beautiful, full of stunning scenery, interesting wildlife and friendly people. As a result, I thought that I might share some photographs on this blog.

Now, there are some fantastic blogs and posts about photography on WordPress. This, unfortunately, is not one of them.

The reasons for this come down to two things. Firstly, I don’t have a new or high-specification camera. Instead, my photos come from a combination of my iPhone 4 and my wife’s old camera that has been in use for about ten years and is now missing a few screws. Secondly, I come from the school of ‘click first and ask questions later’, which means that my pictures tend to be a bit hit and miss.

Anyway, as per the post title, the photos you are about to see are not my best efforts (I’m keeping those ones for Facebook in a vague attempt to show off) but are probably better for comedic effect. This is therefore an ‘alternative’ photography post, one that pokes fun at the lesser photos that most of us take whilst on holiday but never actually show to people. So, here you go…

1) We flew into Calgary and this was the first picture I took after arriving and heading out into the city. It’s Calgary tower and very nice it is too. You’ll notice the strange angle as an indication that I was tired, jet-lagged and therefore couldn’t be bothered to take the few steps back in order to fit the whole thing in.

2) The Olympic plaza in Calgary, where the medal ceremonies were held for the 1988 Winter Olympics. I wanted to get a picture that focused primarily on the Olympic rings, but this time didn’t move forward enough. I do, however, have a nice snap of some steps and railings.

3) Minnewanka Lake near Banff. Absolutely beautiful if you can get past the schoolboy humour of the name. In this photo, I’ve somehow gone for a slightly wonky angle and some prominent overhanging branches.

4) Being a bit of a sports geek, I like taking photos of golf courses. It appears that I like it even better when the photo is dominated by a massive shadow. I somehow doubt this one will trouble the promotional brochures for Banff Springs.

5) Taken on my phone through the rental car windscreen, this is a picture of a coyote’s arse. You’re welcome.

6) This is a deer in Banff eating a bush outside a hotel. Oh, and some random people who wouldn’t get out of the way of my shot. Very inconsiderate.

7) Er, some rocks. Oh, and there’s a squirrel in there somewhere too.

8)  This was a very pretty waterfall. You’ll have to take my word for that as I haven’t got the whole waterfall in the shot, instead focusing on a lovely dead branch in the foreground. 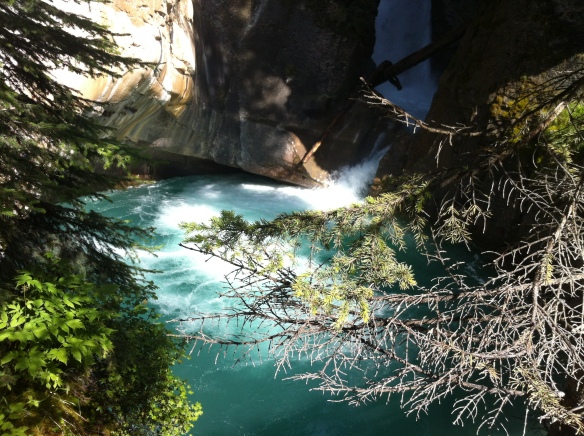 9) Moraine Lake near Banff is stunning with it’s turquoise water and the ice on the mountains in the background. Apparently, I also liked this tree in the foreground as well…

11) Note to self: When taking photos of the Athabasca glacier from the car – roll the window down first… 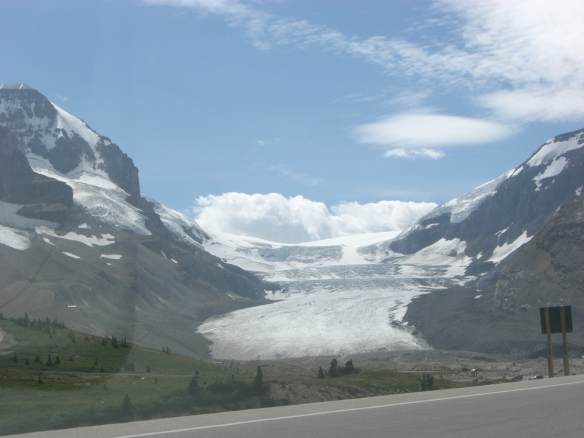 12 & 13) Pictures of a totem pole in Jasper. An unfortunate case of way too near and then way too far.

14) Along with that earlier shot of the coyote, this picture of a bear will be included in my upcoming book ‘Animal arses I have seen through a car windscreen’.

15) This one was taken on the ‘Peak 2 Peak’ gondola in Whistler. It holds world records for the longest free span between ropeway towers (3.03 kilometres) and highest point above the ground (1,430 feet). Sadly, this is not reflected in the photo because I’m terrified of heights and it was the best I could manage when I finally summoned the courage to stand up from a cowering, near-foetal position.

16) Mrs.D: Why don’t you move to the left so you don’t get that tree in the shot?  Me: I think it might actually come out alright…

18) The nearest I got to killer whales. I’m particularly proud of the way that it shows humans and nature co-exisiting on the open waters (translation: I was being thrown round on our boat and therefore included that dinghy in the shot by mistake).

19) Nothing depicts the power and meaning of a statue more than a photo that cuts off its head.  I have, however, included the head of that man in the blue shirt instead – will that suffice?

20) For some reason I decided to take a picture of the intersection between Georgia street and Hornby street in Vancouver city centre. This is great if you have a fetish for scaffolding though. 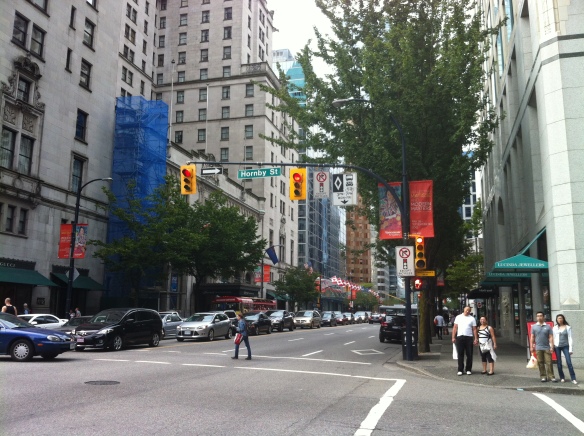 21) View from our hotel room in Vancouver. After all, who doesn’t love a good car park?