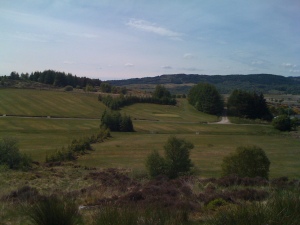 I came back to you today after a few months away and plenty of time to reflect. I deliberated for some time about this as our relationship has always been dysfunctional at best; sometimes even downright volatile. Yet, you drew me back in, as you always do.

I am almost disgusted with myself. I glimpse the manicured greens and neatly trimmed fairways. I even admire the strategically-placed bunkers and picturesque lakes, despite knowing that they are (figuratively and literally) a graveyard for my balls. Even today, I knew it was wrong. I told myself not to dwell too much about that opening 7 on the 1st hole. After all, it was bound to be awkward meeting again after such a considerable time apart.

Yet here I am again. Despite friends and family telling me about the benefits of fresh air and a good walk, I know that you are sometimes detrimental for my health. You send me off on a roller-coaster of emotions, occasionally in the space of a few minutes. I know from bitter experience that I can spank a perfect tee shot to within 20 yards of the hole, yet end up taking a further 5 shots, by which time I’ve forgotten all about the fresh air and am instead cursing my clubs, myself and above all, you.

I’ve become infuriated trying to escape from a huge patch of heather after a drive only missed the fairway by a matter of inches. I’ve been overwhelmed by incredulity when a seemingly good drive results in a missed ball. More frequently, I’ve experienced total embarrassment when people have been watching and I’ve shanked a shot into whichever trees happen to be nearby at the time.

But I know it’s not just me you stick your claws into. Friends and family have also been baffled by your manipulation and cruelty. 18 years on, my mother still speaks of the time when she nearly caused an international incident after one of her tee shots narrowly missed a cart containing a Japanese couple and their 2 children. Well, by ‘narrowly missed’, I mean ‘went straight under’. In fact if it was a game of ‘crazy golf’, it would have been a very impressive shot. However, for fear of traumatising my mother and dredging up the past too much, I shall move on.

But, when returning to you today I also thought about the good times. There was that eagle 2 on the 7th hole of the Kyles of Bute Golf Club 12 years ago; playing the famous ‘Old course’ at Walton Heath. Even last summer, there was that front 9 at Rusper Golf Club that had promised so much (before the inevitable collapse once people started catching up and watching me tee off). Remember the holiday to that strange little course in the North-West of Scotland, where I tried and failed to chip my ball over that dry-stone wall in front of the green? Oh, how we laughed.

And so, the feeling that you are the one for me in the long-term just won’t go away. If I’m honest, my true love is football and it has always been so, yet I know that will never last. Football has always preferred younger men and I am approaching the veteran stage. There will come a day soon where my achilles tendons will decide they’ve had enough, or my legs will go to the point that I am wheezing just trying to keep up with the ever-younger opponents. By which time, football will kick me to the kerb for good. I’ve dabbled with running, but running just doesn’t do it for me. I can bring music along, but even that doesn’t take away the pounding in my ears and the curious taste of blood in my mouth. Plus, I look REALLY ridiculous in a running vest. Imagine a reject from one of the ’Mr.Muscle’ adverts and you get the picture. It’s not a pretty one.

So golf, it is you I gingerly come back to. You who I feel I have the best chance of a long-term relationship with, albeit a relationship that will be fractious and where I will feel like giving up most of the time. It may be difficult but you got to me a long time ago and I can’t let you go completely. In the most abysmal round, there will always be at least one good shot I remember, and it is that one shot I know you will tease me with until I return again.

So there you have it. You are far from perfect; in fact you are downright irritating. But I’m far from perfect myself. So maybe that means, in a really strange and twisted way, that we are meant for each other in the long run. Just don’t keep losing my balls, ok?